Bicycle Accident Lawyer in Denton, Dallas, and Fort Worth, Texas

Many people across the United States ride bicycles for transportation, for health, and for enjoyment. In Texas, a bicycle is considered a vehicle and cyclists are required by law to follow the same rules of the road as motor vehicles. In fact, cyclists have just as much right to the road as motorists. Bicyclists, however, are much more defenseless to injury or even death as they are sometimes not visible, and in many cases, drivers of motor vehicles are simply not paying attention to bicyclists. Unfortunately, not everyone shares the same “share the road with bicycles” attitude and many cyclists are harassed, thrown off their bikes during “near miss” accidents, or hit by vehicles.

At a national level, as reported by the National Highway Traffic Safety Administration (NHTSA) in 2017, 783 bicyclists were killed in traffic accidents in the United States and the number of bicyclist injuries was an estimated 49,000. In 2016, there were 840 cyclists killed in motor vehicle traffic crashes in the United States, an increase from 829 in 2015. Cyclist deaths accounted for 2.2 percent of all motor vehicle traffic fatalities.

Below is chart from the National Highway Traffic Safety Administration with the total fatalities and cyclist fatalities in traffic accidents from 2007 – 2016: 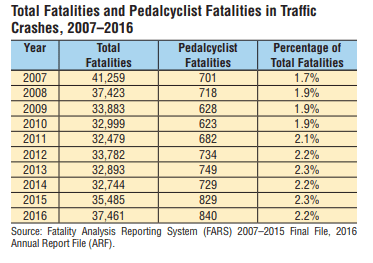 In an accident contest between a bicycle and a car or a truck, in every instance, the cyclist will lose.  Drivers of motor vehicles, because of their larger mass and speed have a duty to pay careful attention to cyclists on the road. If drivers are negligent and that negligence causes a bicycle accident, the attorneys at Chandler | Ross, PLLC will hold them responsible.  If you or someone you love is injured in a bicycle accident in Denton, Dallas, or Forth Worth, you need an experienced personal injury attorney on your side. From the moment you are injured, your personal injury attorneys at Chandler | Ross, PLLC will go to work fighting to protect your rights and ensure that you receive the maximum compensation for your injuries.

Due to the speed at which bicycle accidents occur and the little protection a bicycle offers, cyclists who are hit by motor vehicles usually sustain severe and life-changing injuries, including:

Any of these catastrophic injuries can, and most likely will, greatly diminish a cyclist’s quality of life. Cyclists who are involved in a traffic collision may find their entire life turned upside down. They may be unable to work, provide for their family, enjoy their hobbies, or even ride a bike again. Exorbitant medical bills, rehabilitation expenses, and long-term disability are just a few of the costs that can cripple an injured cyclist and his or her family.

The Texas Transportation Code statutes address the laws that all bicyclists must follow in the State of Texas. These rules include:

Under Texas law, a driver can found negligent and liable for damages if a plaintiff can show that the driver violated driving related laws. Common examples include speeding, running through a red light, failure to yield the right of way, and generally not adhering to the traffic laws.

Unfortunately, some drivers do not always watch for cyclists on the road, and distracted driving can lead to horrific bicycle accidents. When this occurs, insurance companies will often try to blame the cyclist—citing that they swerved into oncoming traffic or into the vehicle’s path. Sadly, this is far from the truth and our experienced personal injury attorneys will investigate your accident closely to determine who is ultimately responsible for your accident—and your injuries.

With offices in Denton, Dallas, and Fort Worth, our Bicycle Accident Attorneys at Chandler | Ross, PLLC are well positioned to provide the most effective and highly-skilled representation possible.  Don’t wait, and don’t compromise – contact us today to see how we can help you.  In most cases, you pay nothing unless we settle your case or win a verdict.  Contact Us now at (940)-800-2500 or support@chandlerrosslaw.com to schedule your free personal injury case evaluation and consultation.

Let us help you!

Don’t wait, and don’t compromise – contact us today to see how we can help you.  In most cases, you pay nothing unless you win.  Contact the team at Chandler Ross Personal Injury law now!